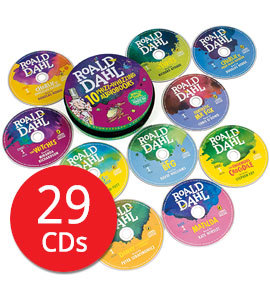 Ten of Roald Dahl’s most-loved stories are read by a host of famous names in this swish-wifflingly scrumdiddlyumptious 29-CD audiobook collection.

One of Dahl’s biggest fans, David Walliams reads The BFG, while Douglas Hodge, fresh from playing Willy Wonka live on the West End, lends his voice to Charlie and the Chocolate Factory. Kate Winslet reads Matilda and comedians Chris O’Dowd, Peter Serafinowicz and Richard Ayoade lend their animated vocal talents to Dahl’s best-loved characters The Twits, Fantastic Mr Fox and Danny the Champion of the World!

All unabridged, these books are a must for keeping the whole family entertained on long journeys, the CDs come in a handy and stylish tin case, too.